Grab a cuppa and a snack, this post is L O N G and full of pictures! 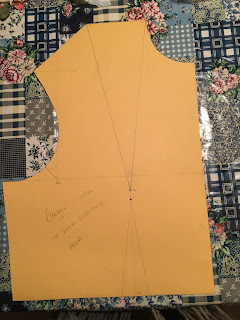 Since I attended the bodice-drafting class at Makeplace in Norwich I have been doing a LOT of thinking and planning.  And worrying.  And buying books.  And reading blog posts.  And looking at my lovely fitted block!

And then I drafted a sort of sleeveless top for myself - a bit like a Colette Sorbetto but without the having to add a bust adjustment.  Well, that was a disaster!  Armholes down to the waist, hello bra straps, neckline wider than Gaping Gill...all mostly because I have NO IDEA how to add design ease! Let's just chuck the fabric into the scrap bag and call it a learning experience!  It scared me off for a while. 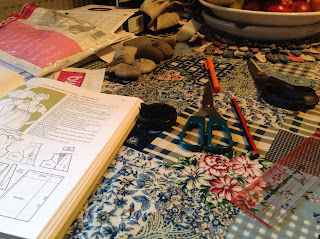 Then I started thinking about what a waste of a class it would be to not do anything else so I looked at the Winifred Aldrich book Metric Pattern Cutting For Women again and started to understand how to actually use it with my block.


I decided to make a button front dress with a swishy skirt.  I cut a half circle for the skirt using the calculator on Patti Brower's website - which is absolutely the best calculator there is!


Then it was time for pattern drafting.  First of all I rotated the dart to the armscye and added a button stand/placket to the centre front.  Those are two things I've never done before - but then I've never really designed something from scratch before anyway so...

I made a toile and the front was really nice - plenty of space, but the waist and bust dart points were ascloseasthis, so I decided to turn them into a princess seam. Oh yes, I know NOW that I need to shorten the dart points for actual wear!

Now, I've never even sewn a princess seam, let alone drafted one of my own, but I like a challenge.  Brave or foolhardy, you decide...

Well, I made a princess seam from the armscye and it worked pretty well.  I liked the look so I dug out a piece of weird vintage fabric I bought a couple of months ago at the Maker's Month thing.  I have NO idea what it is - some kind of nylon stuff - it's a pretty floral, 2.75m for £3.  Even if it went wrong it wouldn't be a massive waste of money.

Oh so slippery though.  It slid all over the table.  I managed to get it cut, but it was a challenge.  And then there wasn't enough for sleeves too, but there was enough to make some bias binding so that's what I've used to edge the arm-holes. 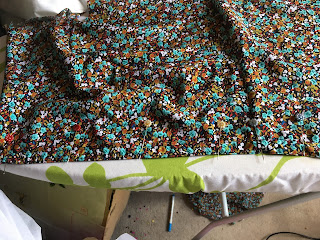 The button placket is quite narrow but I managed to find 10 matching buttons in my tin.  By the following day I only had 9 buttons.  I have no idea where the tenth went, I think the cat flicked it on to the floor - they were enticingly skittering all over the top of my sewing table...

Anyway, I like it, it needs a bit of taking in at the waist, but I like wearing it, weird fabric and all. 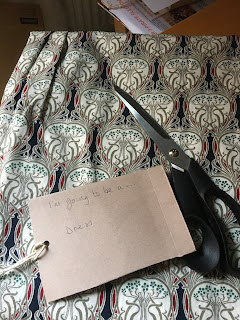 After that I decided to use a piece of Liberty-ish poplin from my stash - I've had it for ages and have already used a different colourway for a Fancy Tiger Fen, so I know it cuts and sews up really nicely.  It was from my local market and is pretty pricey at £10 a metre but it looks very like a combo of Liberty prints Pelagia and Ianthe. 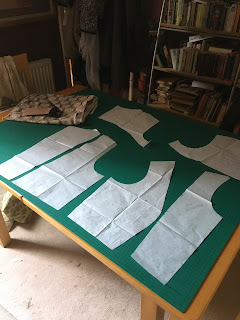 Alterations this time round were to add pockets, draft the princess from the shoulder and add it to the back pieces too, face the neck, put in a back zip instead of front buttons and to scoop the neck.

What went wrong?  Oh a lot!  I put the pockets in too low - it's not a great look scrabbling around the knees!  So I took them out, opened up the seam and put them back in higher up. 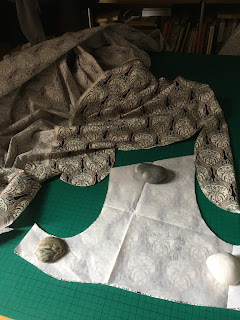 I drafted a facing using this tutorial http://www.emmakespatterns.com/all-in-one-facing/ and then followed the instructions in the Gretchen Hirsch's Ultimate Dress Book for construction.  And having sewn it together I couldn't turn it through the shoulders.  So I unpicked the armholes, chopped it into just a neck facing and then made bias tape for the armholes.


The zip went in PERFECTLY!  My best zip EVAH!

But somewhere along the line the princess seam has gone a tiny bit too big - it's bagging a bit at the front.  It really was perfect on my toile.  And now it isn't.  I might unpick it and recut the lines, but I probably won't.  Or at least not now anyway. 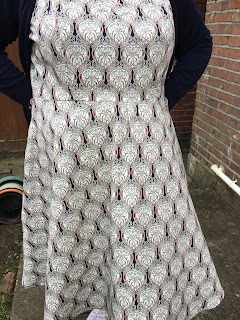 The length after hemming is exactly where I wanted.  And the fit is smooth and has just enough ease to feel fitted but comfortable.  Pattern matching is a bit hit and miss, but in a busy pattern I don't think it's such an issue. 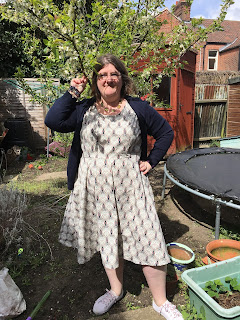 I think this fits the criteria for a spring/summer dress and I reckon I will be wearing it a lot!  If it's windy and you see me out you might want to avert your gaze, the half circle skirt is quite fluffy and prone to knicker-flashing in a stiff breeze!

I love the final look, and I think I shall be tinkering with this over the next couple of months, getting the seams right, maybe narrowing the skirt a little - that would make it less of a fabric-eater for sure and I have some lovely narrow vintage crepe that is just LONGING to be a pretty dress... 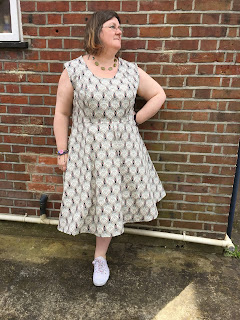 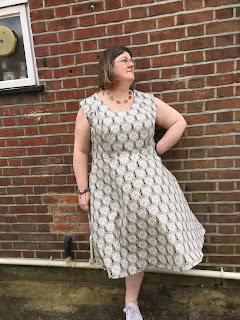 Note: I do have two legs in the usual run of things, one is propped on the wall.  It's a pose that doesn't really work in a dress does it!

Shoe(s) - Asda
Shoelaces - you can't see them, they have cherries on them
Necklace - pretty but weirdly scratchy
Hair - the less said the better TBH.