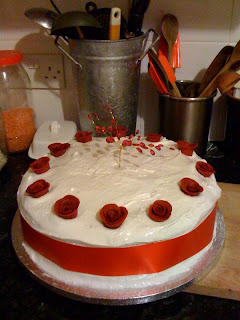 Busy few days lately. On Saturday I saw Inception. It's hugely enjoyable, hokey nonsense, but entertaining! Leonardo Di Caprio is pretty good - much better than I expected as I am not normally a fan, apart from Catch Me If You Can. I liked the effects, and the story reminded me slightly of the kind of thing William Gibson or Michael Marshall Smith might write (although MMS, now he writes mostly as Michael Marshall, doesn't do the 'Where do you want to go tomorrow?' thing anymore, which I loved - I like the other stuff, but I LOVE the MMS early stuff
Anyway, Inception. Yeah, it's good if you like shooty, sci-fi, madly complicated films! My companion asked me what was going on, I had to reply "I have absolutely no idea"! I think we kinda understood what had happened by the end, but I can't be sure.
Sunday saw a wedding anniversary party for some friends which was great fun - I made a HUGE cake (see above), it was a success and almost all got eaten or taken away to eat later. Oh pride, thou cometh before a fall. The following day's jam-making soon knocked me back down!
On Monday, first of all we went fruit hunting - finding a pick-your-own proved tricky. The first one didn't do it anymore, the second one was basically Brigadoon and was, despite the sign by the roadside, absolutely nowhere to be seen, the third one was closed, but they let us in anyway.
We picked 4lbs of raspberries and about 2lbs of gooseberries and I now have 9 pots of jam. The raspberry was a challenge, in my usual roller-coaster-y way, it started fine, turned into a disaster and finally settled into being edible and, ah, quite nice actually. It is not very firm, we jam-makers call this 'soft-set', ahem...
Gooseberry is setting now, I have a weird RSI thing going on from topping and tailing them. How does a green fruit produce a reddy-pink jam?
Posted by Bookwormairhead at 21:06