Summer is the time for Sorbet(to)

If you're looking for a nice easy and quick sew, what you need is the Sorbetto top from Colette.  It's a pretty and simple sleeveless top, perfect for summer.  It's a great stash buster - more on that later.  It's very variable and hackable (is that a word?  It is now...)

Sorbetto pretty famous in sewing-blog world.  I've seen it countless times and I finally decided to try it for myself - I wrote about my first one a couple of posts back.

Sorbetto easy, quick, nice to sew.  But I have had to do a fair bit to get it to fit me properly, and even now I don't think I've got it completely right.  That's down to me, not the pattern.

I hadn't mentioned in my previous post that I did actually tissue-fit.  I'd never done it before and I must say it's hard without help, and my husband, a truly wonderful man in a thousand different ways (feel free to make a vom-face), is not a natural midinette!

I did a fairly big FBA on version 1, and foolishly went straight to cutting out 4 from different fabrics.  Oh dear, oh dear, oh dear! Oh poor excitable me!

So, after the first one I made some more.  On the second I inverted the pleat and just secured it at the neck.  I LOVE this fabric, moustaches are ace!  It was leftover from a skirt I made for a friend, I bought it on eBay from India, it arrived really quickly and is lovely quality - it feels slightly brushed almost and with a good quality print.  The leftover piece had a bit of a fading, but I think I managed to avoid it.  A chap at work asked it is was anything to do with Mr B The Gentleman Rhymer! 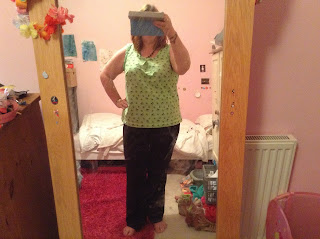 Then I made one from a bit of chiffon-y stuff that came in a mystery bag from Abakhan.  I omitted the pleat altogether and used bought satin bias.  It colour matched pretty well.  The neck is slightly wide but I do really like this one.  Chiffon is a bit of a swine to sew though, it slips all over the place!  And I think my darts are waaaaaaaaay off, but if you're close enough to see that you probably aren't thinking about the quality of my sewing... 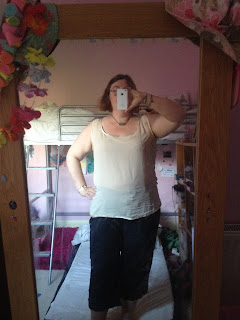 After that I was ready to sew the one I was most interested in.  And here is where I tell you all about how I squeezed it out of a metre.  And I did.  A metre of my precious Liberty Lawn Mauverina, bought a year ago at Liberty itself, treasured for the right project, frequently taken out and gazed upon...my precioussssssss.

Except...you know it's not going to be that simple don't you!  I wouldn't be talking about it if it was!

In my haste I had cut one of the pieces upside down.  On a directional print.  DAMMIT!  So then I had to trawl eBay for some more, because however much I love it, that stuff is £22.50 a metre and I really wanted to pay a lot less.  I found some at a good price, and then had to wait for it to arrive and wash it and dry it and press it and...the waiting was agony.

In the meantime I redid the FBA, and added another inch or so.  And then I checked and rechecked the direction of the print before cutting and made this one.  It's got a slight split at the side seams and I LOVE IT! 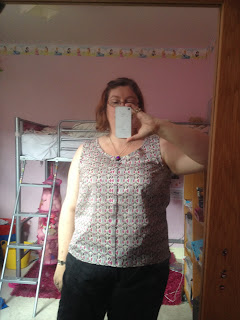 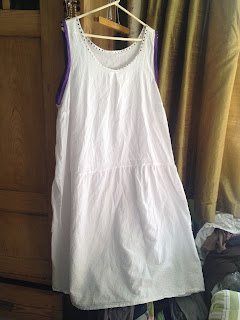 After that I hacked a Sorbetto into a bodice for a nightdress and added a gathered tube for a skirt in some lovely dotted swiss.  Totally non-matching bias binding, but I quite like the contrast.  Super cool and comfortable.


So, can you get a top out of a metre?  Liberty Lawn is 150cm wide and I'd say that even at the larger end of the pattern sizing you can do it if you've also got the width, but it would be tricky on a narrower fabric.  You might need to use bought bias, but it is possible.  Just don't cut it upside down and have to order more.